View source
watch 01:36
We're Getting Mutants in the MCU - The Loop
Do you like this video?
Play Sound
Vitalstatistix
Abraracourcix 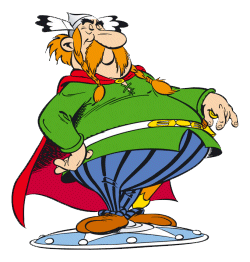 Vitalstatistix (in some translations Macroeconomix or Tonabrix, French: Abraracourcix) is the chief of the last Gaulish village to resist Roman invasion. He makes sure everything is running smoothly and is carried around by Shield bearers. He has a wife named Impedimenta. Vitalstatistix is one proud Gaulish chief... too proud you could say... up himself even! Take "Asterix in Belgium" for instance. The Romans quote Julius Caesar as saying that the Belgians are the bravest of all the Gaulish peoples. Vitalstatistix, hearing this got all angry and decided to go to Belgium all on his own to prove that his people were the bravest. He was probably very put out that the Belgians could destroy Roman Camps WITHOUT the magic potion. Deep down Vitalstatistix is very insecure, constantly worrying that his "Little 'Pedimenta" would desert him and go back to her brother Homeopathix (whom Vitalstatistix hates) in Lutetia. It almost appears that he and his wife have a love-hate relationship although it is apparent they love each other very much. In the first Asterix adventures, Vitalstatistix was portrayed as a wise but somewhat two-dimensional chief. It wasn't until Asterix and the Big Fight that his real character emerged. His appearance changes through the books. In the first book (Asterix the Gaul) he is portrayed having a pink-violet shirt, a yellow cape and blue trousers. In Asterix and the Golden Sickle (the second book) we see Vitalstatistix with a yellow shirt, a grass-green cape and red trousers. The idea is carried in Asterix and the Goths (the third book) where we again see him with a yellow shirt and a green cape (however the cape is now dark-green, rather than grass-green) and white trousers (probably due to printing)! In the fourth book (Asterix the Gladiator), the green cape remains, but the shirt is now white and the trousers yellow. In Asterix and the Banquet (the fifth book) we see the now fully changed chief in his familiar green shirt, red cape and blue trousers. This is the way he will stay for the rest of the series. Vitalstatistix, though a good chief, is perhaps best summed up by his wife Impedimenta, when she says: "Whoever would be fool enough to write the story of our village would not call it the adventures of Vitalstatistix the Gaul!"