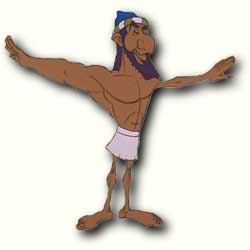 Verses is a character from The Twelve Tasks of Asterix.

Verses has a scrawny left arm and legs, but his chest and right arm are extremely well-muscled. He can throw a javelin across the ocean, and throwing a javelin farther than he can is the second task Asterix and Obelix have to complete. Verses throws his javelin into North America and sends the Indians there to war. Obelix then throws his javelin, which enters a stable orbit and circles around the planet, sending Verses running as it flies toward him. He is last seen running through North America with the javelin still close behind him (and the Indians still at war with each other).

Retrieved from "https://asterix.fandom.com/wiki/Verses?oldid=5459"
Community content is available under CC-BY-SA unless otherwise noted.