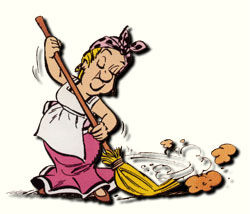 Impedimenta (French: Bonnemine) is the matriarchal wife of Chief Vitalstatistix, leader of the village wives and the best cook in the village. She is often disappointed with the other villagers (calling them barbarians) and wishes Vitalstatistix was more ambitious. Consequently she zealously defends and flaunts every privilege due to her as first lady of the village, such as skipping the queue at the fishmongers. She frequently says she wants to go back to Lutetia and live with her successful merchant brother, Homeopathix – the one member of the family her husband openly dislikes.

She nicknamed Vitalstatistix "Piggywiggy" when they were courting, and starts doing this again in Asterix and the Soothsayer as a plan to make Asterix and Obelix erupt in hysterical laughter when she calls him by that name in front of them, thus irritating him and making him punish them by forcing them to stay in the village, away from the soothsayer.

On occasion she has an antagonistic rivalry with Mrs. Geriatrix that has erupted into violence. One such occasion was in Asterix and the Magic Carpet where the two beat each other with fish from Unhygienix's store over the fakir Watziznehm's carpet.

Retrieved from "https://asterix.fandom.com/wiki/Impedimenta?oldid=4446"
Community content is available under CC-BY-SA unless otherwise noted.