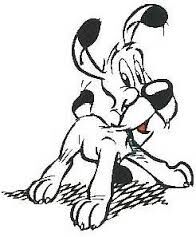 Dogmatix (French: Idéfix) is a small dog, owned by Obelix. His name is a pun on the English word "dogmatic". Dogmatix first appeared in the fifth "Asterix" book, "Asterix and the Banquet", in which Dogmatix met Asterix and Obelix outside a butcher's shop in Lutetia. He then joined them on their adventures, which he often helps quite a bit in, and sometimes even saves their lives. It was Obelix who primarily adopted and named Dogmatix, although he is also good friends with Asterix.

Dogmatix is very small for a dog, despite being apparently full grown. He is white, with a black nose, and black on the end of his tail and long ears.

Dogmatix is very affectionate of Obelix, and Obelix often holds him in his hands and strokes or pats him. Dogmatix is also extremely fond of trees, and howls loudly whenever one is cut down or, more often, uprooted. Obelix occaisionally forgets this, and does so himself, although most of the time he is quite aware of it and makes sure that nobody upsets Dogmatix.

Despite his fondness of Obelix, Dogmatix can also be quite jealous, particularly when Obelix is lovestruck by Panacea. In cases like this, he sulks and prefers to walk next to Asterix.

Dogmatix's great popularity gave rise to a line of children's books in 1973 featuring his "adventures". These were in the form of text with illustrations and were not consistent with the Asterix stories.

Although they carry the Goscinny/Uderzo byline, these are licensed works aimed at the children's market. They lack the style and sophistication of the main Asterix creative team, and have little or no editing for continuity. Although widely translated (not by the regular English translators of the Asterix comics), these comics did not become very popular, and are mostly forgotten. These works (English editions) also contain many glaring mistakes. The Chief's wife is referred to as "Bacteria" while her actual name is Impedimenta. Bacteria is the name of the fishmonger's wife in the English editions

In 1983, an attempt was made to revive the series with two new stories. These were translated by Derek Hockridge and Anthea Bell, who were the regular English language translators of the Asterix albums.

Community content is available under CC-BY-SA unless otherwise noted.
Advertisement