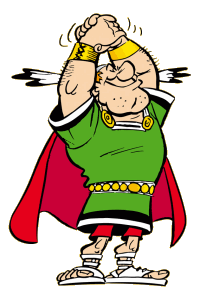 Cassius Ceramix (French: Aplusbégalix), an odious Gallo-Roman chief, who can be placated by two sestertii and the incarnation of all sycophants when faced with an invader («Rome, sweet Rome!»), is a cocktail of foolishness, ambition and cowardice whom Asterix's authors have made the butt of all jokes.

But he's certainly a sight to behold, such was the talent of Albert Uderzo in sketching this hideous, stupid and nasty character: with his sporadic, scruffy body hair, enormous limbs and chin, and his hilarious moronic expression, this mountain of muscles ranks highly among the most expressive creations by the Asterix cartoonist!

Never slow to demonstrate his ardent «Romanness» («Aqueducts are more Roman!», he declares) with his togas and «Ave»s, the very hypocritical Ceramix dreams of becoming the sole chief of Gaul. Abetted by the Romans Felonious Caucus and Nebulus Nimbus, he declares a «big fight» to seize control of the «Crazy Gauls' village» whilst they are perilously deprived of the magic potion.

But he doesn't count on our heroes, and Ceramix suddenly becomes more conciliatory after being struck first by a raging Vitalstatistix and then by a menhir hurled by Obelix… And Ceramix proves, reduction ad absurdum, that René Goscinny and Albert Uderzo have made their allegiance clear: they're with the Indomitables in their fight against foolishness and mediocrity!

Retrieved from "https://asterix.fandom.com/wiki/Cassius_Ceramix?oldid=4712"
Community content is available under CC-BY-SA unless otherwise noted.