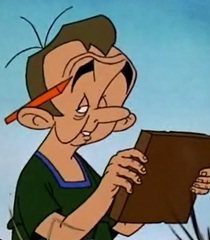 Caius Tiddlus is a character from The Twelve Tasks of Asterix. He is voiced by Sean Barrett in the English version of the film.

Caius Tiddlus is a short, middle-aged Roman who is sent by Julius Caesar to accompany Asterix and Obelix and confirm that they complete all twelve of their tasks successfully. Caesar describes him as "a most trustworthy man, and very honest." Aside from his integrity, he is known for his deadpan speech and thrusting his head forward with each step as he walks.

Caius Tiddlus is allowed to choose his reward for guiding Asterix and Obelix on their journey, and retires to the Isle of Pleasure at the end of the film.

Retrieved from "https://asterix.fandom.com/wiki/Caius_Tiddlus?oldid=7818"
Community content is available under CC-BY-SA unless otherwise noted.