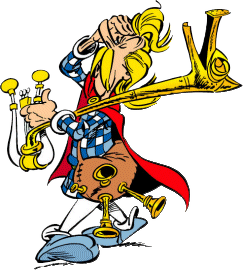 Cacofonix (French: Assurancetourix, in some translations Malacoustix or Stopthemusix) is a fictional bard, who lived in 50 BC. He was created by René Goscinny and Albert Uderzo. His English name is a pun on the word, "cacophony".

Debut in the Series

Cacofonix first appears in the first book, "Asterix the Gaul", where Vitalstatistix is making a speech, and Obelix complains that he is too weak to deliver menhirs, when Asterix warns them both that Cacofonix is coming. Cacofonix claims that he will now give them a song to inspire the warriors with courage. Asterix, Obelix and Vitalstatistix quickly come up with excuses to leave, and Cacofonix calls them barbarians for not appreciating his art. Everyone avoids Cacofonix, because he loves to make music, but he is appallingly bad at singing and playing the lyre. He even causes storms, when he performs. However, everyone tolerates Cacofonix, when he is quiet. Fulliautomatix is always ready to whack him on the head with whatever he has to make him stop singing.

Cacofonix' appearance changes throughout the books. In the first book ("Asterix the Gaul") Cacofonix has a blue cape, completely blue shirt, blue trousers, and even blue hair! Later on during the book his hair becomes blonde. In the second book ("Asterix and the Golden Sickle") Cacofonix changes very little, the only difference is that he now has white hair, white cape, and white trousers. However at the very end of the book his hair swaps to blonde, and this is the way it will stay for the rest of the books. In ("Asterix and the Goths") the third book we see the self-confident bard with a green shirt instead of his usual blue (until Asterix and the Normans he will be with a green-white shirt). The fourth book ("Asterix the Gladiator") is a very special book to him not only that this is the first book to concentrate on him, but his cape has now changed to red and his hairstyle now bares similarity to Elvis Presley! In the fifth book ("Asterix and the Banquet") his cape is white again. In "Asterix and Cleopatra" (the sixth book) nothing special happens, his appearance is the same: a red cape, a green-white shirt, white trousers and blonde hairstyle. The same story in "Asterix and the Big Fight" (the seventh book), no changes. However in "Asterix in Britain" (the eight book) he suffers a step back, his blonde hair is now red (for the first time it is probably a mistake)! "Asterix and the Normans" (the ninth book) brings out the a fully changed Cacofonix, he now looks (and shall remain the same to this day) completely like Elvis: blue-white shirt (replaces the old green-white one), trousers and blonde hair.