You may be looking for the comic book series, Asterix. 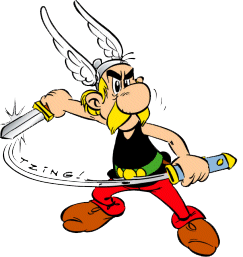 Asterix (French: Astérix) is the titular character and protagonist of the Asterix comic book series. He is the invincible warrior of the 'Little Gaulish Village' and friend of Obelix.

Born in 85 BC, Asterix is a tiny but fearless and cunning warrior, ever eager for new adventures. He lives in the year 50 BC in a Gaulish village located in northwest Armorica. Asterix is one of the smartest and most sensible members of the village, and so he is usually chosen for any dangerous, important, or exotic mission. Unlike most of the other villagers, he does not start or join brawls for the fun of it, although he does enjoy a good fight when there's cause. He rarely resorts to weapons, preferring to rely on his wits, and when necessary, his (magic potion enhanced) fists — though he carries his sword with him wherever he goes, he is shown to be only an average swordsman. What he does for a living is never truly known, though he is often shown running errands or out shopping and hunting. In Asterix and the Cauldron, however, it is clearly stated that neither he nor Obelix has ever done anything of the sort to 'earn' money and can be very bossy to Obelix and sometimes he even makes obelix do something he does not to do

Add a photo to this gallery

Although no romantic interest has been introduced for Asterix as of yet, it seems obvious that Asterix is more susceptible to the charms of women than his best friend, Obelix. He seems 'lovestruck' after receiving a kiss from Panacea towards the end of Asterix and the Legionary and remains so till the last strip. He also seems similarly affected by a kiss from Latraviata, the female protagonist in Asterix and the Actress, although then it seems that La Traviata's effect on Asterix may have gone deeper, as he reflects on her (or maybe something else) during the journey back to their village. Again, while many may agree that both Asterix and Obelix share the same feelings for the same woman, Panacea (judging from the way Asterix often looks at her, trusts her, obeys her, and even goes as far as to kiss her in a hypnotic trance which may be symbolic for love-sickness itself) it may simply be an act of instinct rising out of loneliness, as both Asterix and Obelix do not get close to women.

Asterix is portrayed to have a strong bond with his best friend, Obelix. Rarely do they ever have big fights. However, in the book Obelix and Co., and many others, he gets into fights with Obelix, though they do not last long. Uderzo and Goscinny both meant Asterix and Obelix's names to be symbolic. The name "Asterix" came from the asterisk symbol (*). Obelix's name came from the obelisk (dagger) symbol. This was meant to be both symbolic, and a pun, as an asterisk and obelisk are almost never seen without each other, just like the two friends. Asterix and Obelix were once the chiefs shield bearers.

Asterix's parents Astronomix and Sarsaparilla are former villagers who now live in the city of Condatum, and he has cousins in Britannia (Britain). Asterix also has a first cousin, twice removed, named Anticlimax. He shares his birthday with Obelix, whose parents also live in Condatum.

An occasional running gag is that Asterix's age is 'indeterminate'. However, the series is set only a few years after the Battle of Alesia (52 BC) according to the date given on the inside front cover of each issue. In Asterix and the Chieftain's Shield, it is quite obvious that he did not fight in the battle, so it is entirely likely he was too young at the time. According to history, Julius Caesar was born in 100 BC, so if Asterix was born 35 years after Caesar was, and the Asterix storyline is based in 50 BC, that puts Asterix's approximate age at 35 years, and that of Julius Caesar at 50 years.

Retrieved from "https://asterix.fandom.com/wiki/Asterix_(character)?oldid=7721"
Community content is available under CC-BY-SA unless otherwise noted.